I find Sarah J. Maas’ work solidly enjoyable in the way I used to find fanfiction enjoyable (or still would, if I read much of it). It’s wish fulfilment — the beautiful, utterly capable assassin who has her pick of love interests; the decadent surroundings; even the books she has access to and the friends she makes. Let’s not forget that she’s also an accomplished musician, dancer, etc, etc. And that’s great. I enjoy reading this series, and I enjoy the whole idea of Celaena and the fact that she exists.

I’ve never really understood people who expected great literary merit from these books, or even a consistent approach to who Celaena wants to date, sleep with or throw off a cliff. I was alerted to that pretty early on in the instant switches between Chaol and Dorian, and from knowing that neither of those appears to be her ultimate love interest. (Sorry, Chaol fans. But it’s true.)

It’s fairly typical fantasy, with a kickass heroine, magic, Fae, a bit of mystery, a wicked king… It’s fun because it’s pretty unashamed about being that. I know people didn’t enjoy the latest book as much as they hoped, but me… I’m not getting my hopes up. I’ll just enjoy whatever Maas serves up — and stop if it takes a turn I dislike. Same as I would a fanfic.

Before anyone protests, this isn’t about disparaging Maas’ writing. There are some amazingly well-written fanfics and some amazingly badly written original novels. But the feeling of energy and creativity and fun I get is one I associate more with writing for fandom.

The stories contained in this volume are much more meaningful if you’ve already read at least the first book of the series, Throne of Glass. They fill in details referenced in Throne of Glass about Celaena’s background, and how exactly she came to be in the position she’s in at the start of that book, but they have more impact if you already know Celaena. If this was your first outing with her, you probably wouldn’t get to know her well. Each story is connected and leads fairly logically from the previous one, though it doesn’t quite have the cohesive feel of being a novel — it’s definitely episodic.

If you enjoy Celaena, it’s worth picking up; it fleshes out details about her past and gives more weight and meaning to some of the things she says and does in Throne of Glass. It’s an easy read, too; for all that it’s 450 pages worth of storytelling, it seems to fly by.

The books themselves… I’ve never been quite as in love with them as a lot of YA bloggers are, or were, so the collection remains exactly what I expect of Maas: an entertaining story (or in this case, set of linked stories), with an engaging but not perfect female character. (Come on, though; Celaena’s a highly trained assassin, yet she trusts the wrong people, she can be spoilt and petulant, etc. Sam Cortland, I think you deserved better.)

This week’s theme is “Ten Characters You Just Didn’t Click With” and actually, I’m having a bit of trouble thinking of it. Okay, here goes…

I tried to pick books I liked, in general, and characters who are not meant to be villains. I’ll be interested to see what other takes people have on this theme! 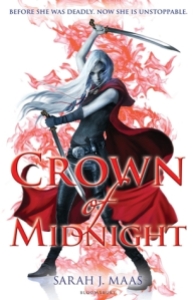 Aaah! This book ups the stakes a lot in terms of emotional involvement and the political backstory. Celaena may have become the King’s Champion, but her troubles aren’t nearly over yet. I drew parallels to Graceling when I did my first review (or in my review of Graceling), and they remain: the reluctant/ethical assassin, trying to find ways to take power back from the corrupt king who commands her.

The whole Chaol or Dorian stuff… I’m not really into that. The will-she-won’t-she doesn’t do much for me, and the whole anger and jealousy thing in this book… eh. I don’t want to see Chaol and Dorian’s friendship broken over this, so I’m really not enthralled with the opposition and discomfort between the two.

The end of the book is a game-changer, telling us who Celaena really is and what she is. The hints have been there all along, of course, little bits and pieces that we could piece together to figure it out ahead of time. So, not so much a surprise to me. There’s more background into other stuff, too: witches, the source of the magic loss in the world, Elena’s presence.

The writing is maturing here. I read that Throne of Glass was written when Maas was sixteen, and it still shows. Crown of Midnight is steadier, more mature, and more emotional too. I’m excited for the third book now, rather than just curious. Hope the library gets it in soon, or my sister takes pity and lends me her copy.

A Court of Thorns and Roses, Sarah J. Maas

I originally received this to review, but I bought a copy in the end anyway. I was actually a little bit nervous about doing so, as Throne of Glass didn’t wow me the way it did so many other people, but in fact I liked this even more. The writing style is slightly more mature — as is the romance content, actually, but that doesn’t matter much to me — and it engages with fairytales/folktales I love. There’s a bit of Beauty and the Beast (with some of the now-traditional elements like the library making an appearance in a slightly different way), a bit of Tam Lin, some fae lore in general, and something that’s just for this book. I enjoyed the way it pulled in those elements, made those references, but made its own story.

Every time I thought I’d figured out what I thought about a character, there’d be another aspect revealed: Alis’ forthrightness, Lucien’s slow coming to terms with Feyre’s presence, Rhysand’s character… it was very satisfying to have the characters developing/changing/growing all the way through.

Feyre herself is really cool. She’s capable, strong, but only because she has to be. She taught herself to hunt, to swim, to protect her family. She’s not Celaena 2.0; she has different interests, a whole different focus. I enjoyed that the book was pretty sex-positive and reasonable about that kind of thing: no random fits of horrible jealousy over things which don’t mean that much, no implication that all previous relationships were wrong…

I’m not sure what I hope for with other books. I’d like to see how Elain and Nesta are getting on; I’d like to see how Feyre goes forward from the end of this book; I’d be equally happy following Rhysand or Lucien… I’m looking forward to it, regardless — and that little bit more eager to get onto reading Crown of Midnight, too.

This week’s theme is books you’d like to see as movies/tv shows. The proviso here is that I would want appropriate casting, e.g. not a white man for Ged or Patriot.

Another week where I’ve been a bit naughty! I have just adjusted my book budget to take other stuff into account, though, so I had the leeway. Thankfully. I hate failing at any challenge! But first…

It was listed as just a preview excerpt, but what I downloaded seems to be the full file. I am immensely excited about this one. My review of The Just City is actually (finally) going live on Monday!

A friend bought me An Ember in the Ashes to comfort me about the election results! A couple of the others were on sale on Amazon or something like that. Aside from Sabaa Tahir’s book, they’re all paperbacks; for some reason I’m not really in the mood to read on my ereader at the moment, much as I love my Kobo.

I got a couple of others, but I’ve featured them here before; I just grabbed ’em from the local library while I’m visiting my parents, to reduce the amount of books I had to haul across the country!

Yay so many comics! Boo that my pull list is now costing me £10 some weeks. Whoops.

Is it Saturday again already? Whoa. I’ve been catching up on blog stuff all this week, thanks to the readathon — which is not a complaint.

I have finally got round to writing a review of The Buried Life, which will be up soon; Cities and Thrones is the sequel. You can still check out Carrie’s post here from her blog tour for The Buried Life, too! I got The Eye of Strife via LibraryThing; I’ve been meaning to read Dave Duncan for ages, so this should be interesting.

I’ve been interested in Sword for a while, so I picked it as my win in one of the readathon giveaways. <3 Dreams of the Golden Age was my pick for another win; that hasn’t arrived yet, which is probably good, because I need to reread After the Golden Age, and I think my partner has my copy.

Daughter of Smoke and Bone and The Drowning City are both rereads, to get me back up to speed for the next book in the series/trilogy. Crown of Midnight is obvious, since I just read Throne of Glass (but I’m sorry, I just don’t love it as much as some of you guys seem to). I have The Deadly Sisterhood somewhere, but goodness knows where. And I just like Susanna Kearsley.

Quite a contrast there between the covers, heh. I reaaally need to actually read the issues of Silk I have… I’ve been tearing through Kowal’s series lately, just in time for this last book. I’m excited!

I usually prefer to listen to audiobooks I’ve already read for myself, hence Among Others and Rivers of London (the latter of which I’d like to refresh my memory on anyway); Epigenetics: How Environment Shapes Our Genes is a new one for me, which I couldn’t really resist because epigenetics! Non-fiction! Science!

How’s everyone else been doing? Behaving yourselves?

I’ve behaved myself shockingly well this week — no new books, no comics, and just a couple of library trips. Which is really odd, considering the readathon starts later today and normally I like stocking up… Hoping to pick up Crown of Midnight (Sarah J. Maas) from the library today, but it’s not open yet.

The Mary Stewart books are rereads, which I might revisit during the readathon… although I think Touch Not the Cat is the Stewart book I’ve read least recently, and I’m pretty sure I have a copy around here somewhere. The Secret Museum is one I’ve nearly finished; a fascinating exploration of all kinds of things too precious or difficult to display in traditional museums.

Oh, and I do have a review copy to be joyful over. Frances Hardinge’s latest!

Pretty excited about that one, even though I really need to stop requesting ARCs if I ever want to reach my goal of 80% ratio on Netgalley by the end of the year…

How’s everyone else been this week? Acquired anything shiny and interesting?