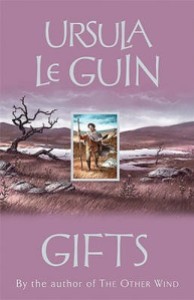 Gifts is a quiet story, in the way that Ursula Le Guin can do really well: those moments of silence, introspection, contemplation. It isn’t my favourite of her books, but I love the things she explores here: the longing of parents to see their children succeed; love within families; grieving and loss; trying to choose the lesser evil… Orrec’s voluntary blindness and the way it affects the world around him, his fears and his wants, are beautiful; Canoc is a wonderful portrait of a difficult man: difficult to love, impossible to hate.

The whole feel of the book is really epitomised by Gry, for me; her quiet loyalty and determination, her love of Orrec which is undemanding and completely rock-solid. Their friendship and later the love between them is perfect.

I’m looking forward to rereading the rest of this trilogy; as I recall, the other two books feature more suspense and tension, and less of the solid quietness of this book. All of them have their own loveliness, though: it’s Le Guin, so how not?

This week’s Top Ten Tuesday is a freebie, so I’m going to borrow an idea that came to me via Guy Gavriel Kay:

“My youngest brother had a wonderful schtick from some time in high school, through to graduating medicine. He had a card in his wallet that read, ‘If I am found with amnesia, please give me the following books to read …’ And it listed half a dozen books where he longed to recapture that first glorious sense of needing to find out ‘what happens next’ … the feeling that keeps you up half the night. The feeling that comes before the plot’s been learned.”

So here’s my ten… Consider this an order if I am ever found with amnesia!

Now I almost want that to happen, so I can study the neuroscience of reading and memory from within! It’d also be interesting to see how I reacted to the Harry Potter books if I couldn’t remember a) reading them as a child and b) the hype surrounding them. And —

Yeah, I’ll stop. Looking forward to seeing what themes other people have gone with this week!

This week’s Top Ten Tuesday prompt is “ten authors I really want to meet”. Now, I’ve actually been lucky and met a fair few authors I love — Jo Walton, Robin Hobb, Alastair Reynolds… But I’m sure I can come up with ten more.

So, uh, yeah. I could probably think of more, but I’d better stop daydreaming now…

This week’s Top Ten Tuesday is “Top Ten Books Which Feature Characters Who _____”. So, because I’m predictable like that, let’s have my top ten characters who love books!

That was actually harder than I anticipated. Huh. Looking forward to seeing what themes other people are going with!

This week’s Top Ten Tuesday prompt is “Top Ten Inspiring Quotes from Books”. Which is a little bit hard, because I don’t really keep track of quotes. But there are some that stick with me — maybe not inspiring, so much, but defining.

That was… surprisingly hard to choose. On the Road makes it only because of something else I once read that quoted that line; I’m afraid I don’t like the book itself.

Dancing at the Edge of the World, Ursula Le Guin
Review from October 12, 2012

I think Ursula Le Guin’s collections of essays were the first non-fictional works that I really learned to appreciate. I was very much not a non-fiction person at the time, but Le Guin’s writing is always so full of clarity, so well considered, that it draws me in when it’s non-fiction as surely as when it’s prose.

Obviously some of these essays are somewhat dated now, written and edited in the 70s and 80s, but there’s still a lot of interest there. Le Guin’s thoughts on the gender issues in The Left Hand of Darkness, for example, years after it was published, years after she originally wrote about it, for example. Or her reflections on her mother’s life, or on Jo March as one of the few female writers in fiction to be a writer and have a family at the same time… A personal gem for me was coming across, in the section containing book reviews, a review of C.S. Lewis that almost inevitably also reflected on J.R.R. Tolkien:

J.R.R. Tolkien, Lewis’s close friend and colleague, certainly shared many of Lewis’s views and was also a devout Christian. But it all comes out very differently in his fiction. Take his handling of evil: his villains are orcs and Black Riders (goblins and zombies: mythic figures) and Sauron, the Dark Lord, who is never seen and has no suggestion of humanity about him. These are not evil men but embodiments of the evil in men, universal symbols of the hateful. The men who do wrong are not complete figures but complements: Saruman is Gandalf’s dark-self, Boromir Aragorn’s; Wormtongue is, almost literally, the weakness of King Theoden. There remains the wonderfully repulsive and degraded Gollum. But nobody who reads the trilogy hates, or is asked to hate, Gollum. Gollum is Frodo’s shadow; and it is the shadow, not the hero, who achieves the quest. Though Tolkien seems to project evil into “the others”, they are not truly others but ourselves; he is utterly clear about this. His ethic, like that of dream, is compensatory. The final “answer” remains unknown. But because responsibility has been accepted, charity survives. And with it, triumphantly, the Golden Rule. The fact is, if you like the book, you love Gollum.
In Lewis, responsibility appears only in the form of the Christian hero fighting and defeating the enemy: a triumph, not of love, but of hatred. The enemy is not oneself but the Wholly Other, demoniac.

I’m not sure I agree with all of that — the Southrons are most definitely Othered, and I’m not sure they’re meant to be universal symbols of the hateful. Or rather, if they are, and perhaps they are, we need to examine why Tolkien made that decision. But I do think that this is an informative way of looking at the two authors, which reflects a lot on Le Guin herself as well.

This week’s topic from The Broke and the Bookish is a great one: top ten heroines. Let’s see…

I’m gonna have to look at loads of posts on this one, because stories with good heroines are definitely of interest to me!

The evil lair is where a great fantasy villain will spend the plurality of his or her time.

Now of course, there are some really iconic ones — Saruman’s Isengard, Sauron’s Mordor, even Shelob’s Cirith Ungol and Smaug’s Lonely Mountain — but I’ve been racking my brains to think of something a little off the beaten path. So I remembered a quote I read somewhere quite recently, about the people who ultimately do the most evil being the people who are unshakeably sure they’re right.

Looking forward to seeing what other people came up with, here; hoping it won’t make me want any new books, because I don’t have a debit card to buy them with at the moment!

The prompt this week for Tough Travels is this:

Seems odd to think that in fantasy cities in which entire economies revolve around crime there is room for the men in blue (or crimson, or whatever). But the law does the best it can, even when faced with magic, mystical creatures, or rogue deities.

So I thought about this and for some reason my mind was totally blank. I mean, there’s various forces of law and order in fantasy, of course, but I couldn’t think of specific ones. In a lot of what I read, they’re just in the background — the king’s guardsmen, the city watch, whatever. Anyway, I’ve done my best to think of some of the forces of law and order that we don’t normally associate with the men in blue, as such. Like…

And for a guy who does represent the boys in blue, though this is not strictly fantasy (it’s alternate history)…

This week’s Top Ten Tuesday is ‘ten books I’d love to read with my book club’. I am a member of an awesome group for SF/F, so that’s easy — except that we’re quite particular about the sorts of books we end up reading for discussion. So hmmmm.

What about you guys? Any reading groups online to recommend?