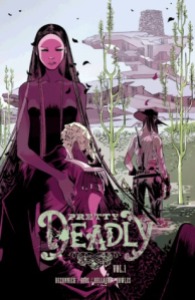 I’m having a bit of a hard time with this book. I didn’t find it as confusing as many other people seemed to, but I do feel that there wasn’t much to grab hold of. It felt like set-up, something that might’ve been better as a flashback in an established comic, because you get the feeling that the important stuff is yet to come. And worse, you don’t get much of a grasp on character — it’s like a myth in that sense, but there’s also the Wild West vibe and other stuff going on that makes me feel like it should be more than something pretty and mythic. I mean, we know what Deathface Ginny is by the end of this, but we have no freaking idea who she is. Allegiances and relationships and characters are all unclear.

Visually, it’s a stunning comic. I’m not a great fan of Emma Rios, usually; I really didn’t like the work she did on Captain Marvel. This worked better for me, though, and there’s some amazing pages here. They can be a bit crowded, though — full of panels, and very little script and explanation.

Overall I think it’s a cool idea and a cool team — I am a fan of Kelly Sue, and Rios’ style does look good here! — but I think it needed to be tightened up, pruned, written differently. I don’t know if I’ll read more of Pretty Deadly; I think I might look for like-minded reviews and see what they’re saying when there’s another TPB out. Deathface Ginny could be really, really cool, but there’s so little of substance here.