It’s my birthday! Or, actually, it’s now two days after my birthday. I got some new bookish shirts (“high shelf esteem” being one of them; “I like to party and by party I mean read books” being another! They’re from LookHuman.com like the shirts I reviewed here) and a few new books. Hurrah.

And there was a library trip, of course.

I’m a little worried I’m going to blend the plots of the Mercy Thompson and Kate Daniels books if I read them at the same time… still, the library in Cardiff doesn’t have them, and the library at my parents’ does, so!

I was supposed to get Hawkeye for Christmas. Seriously! And now I finally have it and… I haven’t read volume three and my copy of volume three is not here. Gaaah.

What’s everyone else been grabbing?

This week’s theme for Top Ten Tuesday is top ten new-to-me authors I read in 2014. Hmmm…

What about you? Anything you think I’m missing from my life?

What have you recently finished reading?
On My Way to Jorvik, by John Sunderland, which is an autobiography by one of the people involved in creating the Jorvik museum, talking about how he got there considering he actually had no experience with museums at all. It’s okay, but it gets more interesting once he actually gets onto Jorvik — I was less interested in his personal life. And there was also Radio Free Albemuth, which I’ve already posted my review of.

What are you currently reading?
We Are Here, by Michael Marshall Smith. Which I got spoilered for a bit, but spoilers don’t tend to bother me, and I was already figuring it out anyway. I love the way this guy writes, and have really enjoyed everything of his I’ve read, but this one is kinda slow — well written, but slow. It’s driving me a little batty because I really want to love it, and there’s so much to like, but… not enough happening. Or not enough happening that makes sense, anyway.

I’m also still reading Manon Lescaut, and next week in Fiction of Relationships is (I think) Jane Eyre, by Charlotte Bronte, which I love and adore. So I’m partway through a reread of that.

What will you read next?
For once, I’m pretty sure — my books from the library ’round here, since soon I’m going back to where I normally live. So Timescape (Gregory Benford), Book of Skulls (Robert Silverberg) and, if there’s time, Magic Strikes (Ilona Andrews). If not, I know I can get that one from the local library. 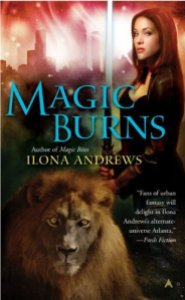 I continue to really like this series. Sure, the writing isn’t sparkling deathless prose, but it’s functional and brings across the voice of the narrator — very no-nonsense, down to earth, tough-talking woman. What continues to intrigue and please me is the characterisation of Kate: stubborn, pig-headed, yes, but also willing to admit when she’s wrong, picking her battles, not afraid to admit when she needs help… Not afraid, even, to admit that she’s vulnerable, alone, that she’s not entirely happy to be without a partner. At the same time, she isn’t overly sentimental about it — though nor is she rushing into the bed of every guy who smiles at her.

Overall, it’s a good balance, to my mind. There’s also interesting world building — the circumstances of the magic waves in Atlanta, the history behind Kate that we don’t really get to know yet, the words of power, the different groups of supernaturals… And it’s pretty well paced: there were a couple of points where it seemed to stick a bit, but I pretty much read it in one go.

I keep coming to this expecting total bubblegum, but I come away happier than I expected because they dodge so many of my pet peeves and annoyances.

Rating: 4/5; review of the first book

Good morning, folks. Once again I have acquired more books than anyone rightfully should, and can’t help but feel rather smug about that. But in the interests of stacking your shelves, let me just direct your attention to my giveaway post for Strange Chemistry/Exhibit A books here. Please link it to anyone you think will be interested: the authors concerned need our help right now.

Otherwise, back to your normal programming: Stacking the Shelves, as hosted by Tynga’s Reviews! This week with the theme I Just Got Paid So I Will Buy Everything, Who Cares About A Theme? Which isn’t as fun as buying all superhero novels all the time, but is still pretty fun.

I’m kind of most excited about The Invisible Orientation, because I’m halfway through and it talks so much sense about the range of queerness that’s out there, never mind just asexuality. But I’m also interested in Rachel Aaron and Josh Lanyon: it’s been a while since I read any Lanyon, but there was a point when I read his books like candy.

Another sciency week, apparently. The first two are my srs reading, the second two fuel my love of knowing really random crap.

Actually Christmas presents from my partner, but Amazon didn’t deliver the third volume and so I didn’t want to feature the fourth until now. But here they are! Time for me to get myself educated on some X-Men stuff. (I picked Ultimates because I liked their appearances in Ultimate Spider-man.)

I rebought the Garth Nix books, which I love, because they’re finally out in ebook in the UK and Clariel will be coming out soon. Otherwise it’s a mix of recs or liking the author’s other stuff. I’m very glad now I got Glaze, considering the bad news about Kim Curran’s publishers for her other books.

I’ve heard good buzz about the first two, I’ve liked some of Tidhar’s other work, and the third promises a more Arabian Nights than European setting, plus the first line is “Once there was a city of women.” Which is bound to catch my eye when I’m pretty sure it’s not referring to the Arthurian Castle of Maidens.

My plan for this next week is not to buy or borrow anything more, and take a leaf out of Under The Mountain‘s book and do Unstacking the Shelves.

So what’s anybody else been picking up? Don’t forget about my giveaways, and make sure to leave a link here when you comment on this post, so I can visit your blog in return!

Yep, you guessed it, it’s Saturday, time for Tynga’s Reviews‘ Stacking the Shelves. I haven’t bought anything this week, either, but for some reason the library has increased my borrowing limit so I indulged a little there, and I have one ARC.

I’ve already started on Warbreaker, since I enjoyed The Rithmatist earlier this week. I wasn’t quite ready to dive into the Mistborn books…

What’s everyone been reading?

I wasn’t expecting very much of this one, despite hearing some good things about it. I mean, it’s always been hanging around on the shelves with the urban fantasy books, which mostly I enjoy in a brain candy sort of way. This was still very easy to read, but it had more world-building than I expected, and required the reader to do more work. It’s got interesting shapeshifter and vampire lore, most of which I haven’t seen anywhere else, and it’s a semi post-apocalyptic setting that’s been caused by magic. I was reminded a bit of Robin McKinley’s Sunshine with some of the world-building, although the vampires are not at all the same.

Kate Daniels, the lead, doesn’t seem particularly special as a character — there’s plenty of tough-talking mercenaries out there, male and female. There were quite a few points, though, where I was very pleased with her characterisation: she knew when to back down, she didn’t go into everything with all her strength but tried to hold back what she didn’t need to use, and despite being a tough-talking mercenary, she was decent towards other people.

Some parts of it didn’t come together for me very well — her motivation seemed to lose its focus halfway through, for example, and the bit about her being special in some way teases for more in later books, but makes some parts of this book a bit deus ex machina-like. The writing isn’t super, but I’m definitely intrigued by the world, and Kate has a lot of promise.

Curran, however, eh. No boundaries, despite all the stuff about shapeshifter control he loses his temper more than I’m comfy with, typical macho posturing crap a lot of the time. I really hope I wasn’t meant to like him, but I rather suspect I was. I wasn’t a huge fan of Dr. Crest, either; he honestly seemed tacked on to be a red herring.