Stacking the Shelves time! I know I keep saying each week is going to be more conservative, etc, etc, and I guess I’m not doing too badly on that. I only bought three books… 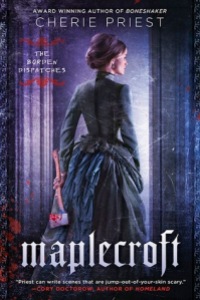 Yessss finally got Maplecroft. And then a book linked to one of my Coursera courses arrived too — I pre-ordered it somewhere back in August…

…Which should be very interesting. And then I happened to drop by the charity shop to see if they’re looking for anything in particular to sell at the moment. They’re not, but they were looking to unload some of their books that people weren’t buying…

Yep, those first three are ones people have been nagging me to read for ages. Technically I already had The Eye of the World in my Hugo Voters’ Packet, but this was free, so, eh.

And finally, of course, I got some review copies.

Non-fiction, mostly! Or it was until I got approved for Willful Child. I’m gonna probably flick through Rewire Your Anxious Brain and review it briefly: I want to know if it’s something genuinely useful or something fluffy and unscientific. I’m guessing it will be pretty scientific given the authors’ qualifications, but you can have a PhD in a lot of things, so it’s not sure and certain.

What’s everyone else been getting? And here’s a goal for next week: no more than three books in my post. That might get spoilt if people suddenly decide to grant old Netgalley requests, but we’ll see!

What have you recently finished reading?
The Hidden Landscape (Richard Fortey), which is gorgeous even though it’s about geology, a subject I care very little about. I think he could actually make me interested in gardening, a subject which I often point out to Grandma I know less than nothing about except I guess I know plant biology.

What are you currently reading?
I’m in a bit of a slump, actually, which makes all my ARCs and review copies a little awkward. Still, I’ve got Dead Harvest (Chris F. Holm) on the go as an audiobook, and Manon Lescaut (Abbé Prévost) has been loaded onto my ereader ready for a class. I think I’m 10% of the way through that? So yeah, not too bad, though I know the plot basically because of the reference in Clouds of Witness (Dorothy L. Sayers).

Oh, there is also We Are Here (Michael Marshall), which I’m enjoying in a slowly-unravelling sort of way. I like Michael Marshall (Smith)’s writing in general, so. There’s also Black Unicorn and Book of Skulls, still, which I probably mentioned last week, and The Toll-Gate (Georgette Heyer). As you can see, I’m not taking the reading slump lying down…

What will you read next?
For one of my Coursera classes, I need to reread Jane Eyre (Charlotte Bronte), so that’s most likely what I’ll do. I also have a biography of the Brontes out of the library, so maybe I’ll read that too.

How Pleasure Works is an accessibly written book which mentions some theories and interesting experiments, without really delivering on the promise of “science” that explains “why we like what we like”. Mostly, what Bloom has to offer are theories and interpretations: well presented and interesting, but judging from various reviews, not conclusive enough for people who want hard and fast answers. Luckily, I wasn’t really expecting any, although I was hoping for a bit more science. I’m still left thinking the answer to “why do we like what we like” is “because we’re bloody minded and irrational”.

I took Paul Bloom’s Coursera course, Moralities of Everyday Life, and recommend both that and this book as a relatively mild introduction to the psychology surrounding these topics.

Another one read for my Coursera SF/F class. As usual when I’ve just finished a book, I have no idea what I’m going to write my essay about, but I have one day left to figure it out…

The thing that interests me most, I guess, is that Mars colonises the colonisers. In different ways in different vignettes, but it’s there — particularly in that last chapter/section. In a sense it feels like a recent book: the commentary on the spoiling of the world, and on colonisation; in others it feels so dated — the treatment of people of colour, women, the obsession with nuclear war (which is still an issue, but not the same kind of deep-seated fear, I think)…

The science itself (how long it might take to fly to Mars, being the obvious example) isn’t really important to the story/themes: it’s there as a backdrop, not at all used in the way H.G. Wells used science.

As with most of Bradbury’s work which I’ve come across so far, there are some gorgeous sections of prose here, and it’s all very well crafted and easy to read, as you’d expect.

I have a tragic lack of confidence in my own academic abilities. I know, intellectually, that I have two good degrees in English Literature from a reputable university. But I don’t really believe that. I worry that I was given my degrees out of pity, or favoritism, or due to a sheer mistake. I pretty much embody the idea of imposter syndrome.

My online courses, though they fill me with joy in one sense, are just making that worse. In my literature classes, I am getting bad marks. Literature classes! My ego is bruised and sullen, my imposter syndrome thinks it’s justified, and I’m feeling the urge to quietly withdraw from the course and possibly the entire internet in mortification at my own stupidity.

Because that’s a bloody stupid idea, here is my mini-essay on Frankenstein written for the SF/F class on Coursera, with bonus reference to Beowulf. I’m not going to pretend it’s utter genius, and it’s very short (all essays for this class are 320 words long or less), but it’s an idea I would like to develop and think about some more, and it’s an analysis based on literary context, not completely pulled out of thin air.

The Mark of Cain

There are many Biblical references in Frankenstein, particularly revolving around Genesis and the creation of Adam (“I ought to be thy Adam”, chapter ten). Biblical imagery offers a powerful way to read the novel, and one Biblical story closely connected with that of Adam, though not mentioned in Frankenstein, is the story of Cain and Abel.

The murder of Abel by Cain has its echoes in the murder of Victor’s brother by the monster. Though it is the monster which kills William, Victor is complicit in that death because of his neglect of the creature he made. Both Victor and the monster are set apart from humankind, as Cain is: “a fugitive and a vagabond shalt thou be” (Genesis 4:12), God says to Cain, and that is equally true for Frankenstein’s monster. But it is also true of Frankenstein himself: “I saw an insurmountable barrier placed between me and my fellow men; this barrier was sealed with the blood of William and Justine” (chapter 19).

The monster’s exile is not solely due to his crimes, but also to his appearance, which suggests a link with the mark of Cain (Genesis 4:15). Another link worth noting is that monsters are sometimes described as being descended from Cain: Grendel, in the Anglo-Saxon Beowulf, is identified as kin to Cain. He is a “wretched creature”, as Frankenstein’s monster is so often described, “siþðan him scyppend      forscrifen hæfde / in Caines cynne” (“since the Creator had condemned him with the kin of Cain”, ll. 106-107).

Though this connection is not made explicit by Mary Shelley in the text, the similarities are there; Frankenstein’s monster acts out the first chapters of Genesis in a compressed form, going from creation (as Adam) to acquiring knowledge (i.e. comparing the interlude where he observes Felix and his family with the Fall) to the first murder of the human race (that of Abel).

Here’s something a bit different from the rest of the content on the blog… I’ve been using Coursera.org to do several MOOCs, and one of those was on comics and graphic novels. The final project was to create your own four page comic. The point isn’t to judge the art, but to think about the use of the grid and comic conventions, think about adding colour, etc. I’ve decided I’d like to share mine here as well as on the forums there — I make no great claims about my art, but I really enjoyed the process.

Click on the cover to view the PDF, and feel free to ask questions, etc!

reboot by Nikki Walters is licensed under a Creative Commons Attribution-NonCommercial-ShareAlike 3.0 Unported License.