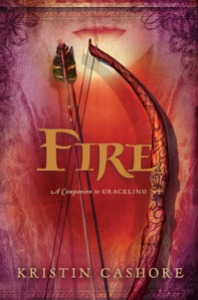 If I’d read this soon after the first time I read Graceling, it might have given me a slightly different perspective on that book. It engages again with stuff like complex relationships where marriage isn’t possible, with the need for contraception and even sterilisation. I’m not always 100% comfortable with the way it’s all handled — I mean, the main character is a “human monster” who causes virtually uncontrollable desire in men.

But then, on the other hand, many men in the book can control themselves, and some of them learn to control themselves out of respect for Fire. So that in itself isn’t a bad message to send, it’s just the fact that Fire is a “monster” and the primary manifestation of that is that she’s so desireable men can’t resist her. I mean, that’s pretty much a men’s rights activist argument for rape being okay, right there.

There’s other cool stuff, though, like the fact that despite her beauty, her allure, Fire is actually battle-scarred, and even loses two of her fingers. She has to work past that to continue to play her violin — and she succeeds. It’s also frank about menstruation and how that can affect a woman’s life, too!

There’s also a lot of working through relationships. Archer is one of the main characters, and he and Fire have a sexual relationship, but then a significant plot point is how to deal with leaving that behind and just being friends again.

In short, in many ways this is a great YA title because it does examine a ton of issues people may well take for granted, especially if their parents have firm opinions about it all.

In addition to that, it builds on the story of Graceling, giving us more information about the world and about Leck, who makes a significant appearance in this book. The prologue is about him, but you don’t see the relevance for a long time. The plot does move a little slowly, I think; we don’t see a lot of the promise of Fire’s character until she leaves home and goes to the city. Then we start to see more of her, her negotiation with her powers and with living in the shadow of a remarkable (and far from universally loved) father.