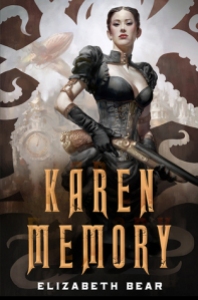 I was in such a hurry to read this when it came out that I bought it on release day, started reading and — promptly got distracted, because I’d been reading it at clinic and then I didn’t go to clinic for a few weeks, and lost the thread, etc, etc. So I started it again today, and devoured it all in one go. I love the colloquial narration, which manages to skirt the line between feeling genuine and being annoying really well. I love the casual way characters of all colours and persuasions are a part of the story, and the way Karen describes the world around her, taking some things for granted and explaining others. For those with pet peeves about narrators, I promise there’s a reason for Karen to be telling the story the way she is, though that isn’t made explicit until the end.

Speaking of explicit, you’ve got to admire the way Bear manages to come up with euphemisms so that a story about “soiled doves” isn’t actually explicit at all, and bar some of the language, isn’t more than a PG rating.

When I started reading it, I had no idea it would actually be a lesbian love story, with a happy ending. But Priya and Karen are so darn adorable it’s worth saying up front: they never get beyond some kissing and holding hands, it’s all making eyes and getting fluttery feelings and figuring out how the heck to tell someone you care without making a mess of it. It works really well, without ever being a big crisis or the most important thing about the whole plot.

Which is a point: if you’re reading this for the steampunk, or the LGBT, or the Wild West, and you’re not so interested in the other aspects… it’s probably one to skip. It’s all of those things and a mystery story, but it’s all those things together, and not focusing just on any one thread. In fact, the mystery/thriller aspect is more prominent than the rest; the rest is background, colouring the story and shaping it, but not foregrounded as such.

I’m gonna need a hard copy of this at some point, because I just love the cover art. But my first priority is getting my sister a copy, ’cause I’m pretty sure she’ll love this one.

« Review – A Court of Thorns and Roses
Review – Company of Liars »