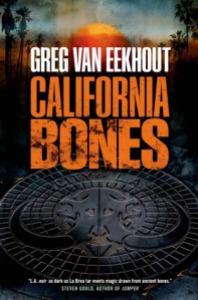 I’ve been meaning to read this for a while, and then got out of the mood for it when I had started it. This time, I read it almost straight through! It’s basically a fantasy heist novel set against a really intriguing background of magic, politics and alternate history. The magic is really interesting, and mostly it’s introduced organically: it’s pretty much explained in the opening chapters, but that makes sense because Daniel is being taught osteomancy by his father. The rest, we need to pick up as we go along — there’s no major explanation of regeneration, shapeshifting, non-osteomantic skills, the way hounds track osteomancers…

While I liked the background, I didn’t get that involved with the characters. There was potential there, and if they appear in the other books, maybe I’ll be more invested. Also, there were a couple of things which were too well telegraphed. Buuut, I think this was a first book, so I’m inclined to be forgiving — especially because I found it pretty well paced.

There’s a recurring image of horror from the early chapters of the book which is really done well, too. Daniel witnesses the death of his father, and sees the Hierarch (an antagonist here, though a bit difficult to properly get a grip on because he appears in person at the start and end only) actually eating his father. And he remembers that image, the sound of the Hierarch chewing. Very vivid, really works.