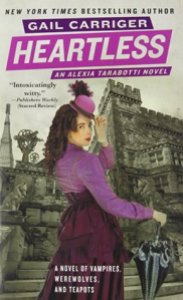 Heartless is still pretty fun, but the humour of these books is getting a little tired. For one thing, it relies on apocryphal stuff about the period (no, table legs were not considered indecent) and silly humour. And a lot of the humour in this book is basically “haha, Alexia is pregnant and huge, hahahaha”. I get that it’s a bit difficult to have Alexia up to her usual tricks without some glossing over of the fact that she’s eight months pregnant here, but yeesh, stop hanging lampshades on it, we get it.

I didn’t think much of the mystery plot, either. Mostly because I didn’t believe that particular character would be so rash and stupid, when we know they’re fearsomely intelligent. It’s like spectacle took second place to believability — which isn’t surprising for the Parasol Protectorate books, since they’re knowingly absurd, but there’s a point where it becomes too much.

What did I like about this book? Well, Genevieve’s love for her son; Akeldama’s relationship with Alexia continuing to be special; Biffy and Lord Akeldama’s doomed love; Alexia’s grit; Professor Lyall. I remain fond of the characters here, primarily, while aspects of the world/writing are really beginning to drive me round the bend — and I wasn’t 100% on board to begin with. Probably not even 60% on board. I’m not fond of absurdity, really.

I am going to read Timeless, because there are some character developments I look forward to, and at least Alexia won’t be pregnant anymore.