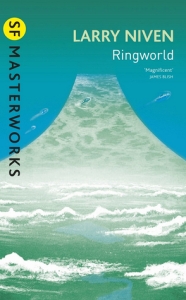 Read this for the Cardiff SF/F book club! I’ve been meaning to read this for a while, since it’s in the SF Masterworks list — and deservedly so, I think. Some of the attitudes to the female characters grossed me out, and there is a casual rape joke thrown in — basically a recurring theme is that it’s a woman’s job to keep the men on her team from going nuts. By having sex with them. Still, the main female character does have an arc of her own through the story which is all tied up with her character and everything else in the book; we’re very much given the impression that all of it is happening because of her.

There’s a lot of interesting stuff here, really: the idea of the Ringworld, the idea of breeding a population for luck (and the exploration of the effects that would have), the aliens’ interactions with one another… There’s a lot of background here that the book uses, without flinging it all at you at once. The style is pretty immersive: you’re right in there with the main character, using the technology of his world, etc. The science is mostly in the background; I gather this was intended to be hard-SF and then gets mocked for some issues, but that isn’t obtrusive for a layperson at all.

Given all that, I’m not all that enthused about reading more of Niven’s work. It’s nice to read the classics sometimes, but I tend to prefer character-driven stories, with human motives driving it; this was definitely not that, as many of the things that happened were ginormous coincidences that only happened for plot reasons. People didn’t have much free will of their own, this way.

For taking an idea and following it logically through, I originally gave this four stars, but after discussion with the SF/F group, I decided to revise it down. Louis is basically a Sad Puppy; this is the kind of fiction the puppies laud, and a lot of it doesn’t sit well with me. It got past my defences because when I read something from the 70s, I automatically give it an of its time tag in my head. Which is a bit silly when it’s being republished in the Masterworks series now as still relevant. Still, the ideas themselves and the consistency of them worked for me, and it was in no way a chore to read (unlike, say, the sequels to Dune, sigh).